It is getting really hard not to be angry at people who, during this crisis, are taking advantage of the situation for personal gain. Andrés Spokoiny recently noted that even though everyone is wearing masks, now is the time the masks come off and this is a time when we see people for who they truly are. Sometimes, I don’t like the people I am seeing.

I hear about states that purchase critically needed healthcare supplies only to find out that the source is bogus. Or that the person is selling materials that are substandard or useless. Or that there are companies that are charging outrageous prices for the same things that were once inexpensive in the marketplace. Capitalism at its ugliest.

I wonder how it is possible for some people to be so self-centered and so cold hearted that they think that every moment is an opportunity to make money and promote themselves when so many others are suffering and sacrificing.

I am not a fool who thinks that everyone is altruistic, charitable, loving, caring and kind. I know most people are giving, and I know some people are not. In my life, I have been personally affected by those who seek to scam me and my family, and I know what I need to do and what I have done to protect myself and my family from them. It hurts me to know that I can’t be as kind and loving as I wish to be for fear of being hurt – physically, economically, and/or emotionally. As the great sage Hillel said in the Talmud, “If I am not for myself, who will be for me?” I have to take care of myself. I cannot risk my life to save another. I have responsibilities for my own health and wellbeing. But this responsibility does not allow me to enrich myself at another’s expense. Hillel goes on to say, “but if I am only for myself, what am I?” We all can do something to ease the suffering of others. We can make a donation, make a phone call, we can do what we can to show our support for those on the front lines of this crisis.

And yet, as frustrating as it is to see so many people trying so hard to delude others, to send them astray from where they need to be, who give others false information and fake news to attain their own political or financial advantage, I refuse to give up hope that things will eventually work out. That those who try to lead us astray will themselves be frustrated; that those who are honest and faithful, will find good people to follow their lead and bring about good outcomes in the areas of health care and the nation’s economy and that we will find ourselves in a country, at the end of all of this, where people are more caring, generous, understanding and compassionate. And that those who are not, will find themselves at the far margins of civilization.

Elijah the prophet gave up hope in the people and God condemned him to wander the earth forever to see the good things that people do; how they are kind to each other and faithful to God.

I plan to work every day to make this world safe, healthy, just and kind. If you like security, health, justice, and kindness, I hope you will help in this work and every day try and leave the world a little bit more of any or all of these qualities. Maybe we will have to rely on a miracle, maybe not. Maybe if we all work together, we will be the miracle.

That will certainly make wearing a mask bearable.

The book of Exodus has many lessons to teach us. Some are obvious, like the Ten Commandments, but others appear only as we reflect on the stories that make up the contents of this second book of the Bible.

Moses is undisputed as a great leader of the Israelites. Moses inspires his people when they are slaves in Egypt. Moses speaks up on their behalf (and on God’s behalf) to Pharaoh demanding the liberation of his people. He leads them not only in a political sense, out of Egypt, but in a religious sense, taking them from the slavery they have known for generations to a free and independent nation ready to enter the land promised to their ancestors by God. This is the journey that takes the people to their land via a prolonged and spiritual stop at Mt. Sinai.

What is also undisputed is the enemy that they face on this religious/political journey. Sure, there are outside nations who hinder their progress, but the most persistent danger comes from those who insist that the best course for the nation is to return to Egypt. The food was better there, the way of life was better there and life was filled with certainty, rather than the unknowns they face in the wilderness.

The Torah calls those who want to return a “mixed multitude”. Commentators usually teach that this was a group of Egyptians who used the chaos of the Exodus to leave Egypt to escape their own political troubles and now found themselves on a spiritual journey they never really wanted to embark on. I tend to look at this “mixed” group a bit more historically. In every age of great change, there are always those who have different opinions, those who want to go back to what is sure rather than look ahead to what is uncertain. 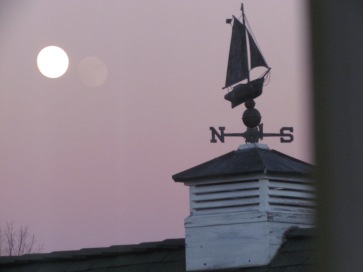 It would be easy for me to take a cheap shot at the supporters of Donald Trump here who are looking to “Make America Great Again” by wanting to go back to the way things were in the good old days. Those days when everyone had a good job, everyone made good money and the good things is life were inexpensive and readily available.  But to be fair, I see a lot of Clinton supporters who are already fondly remembering the good old days when Obama was elected and everything was going right with our country. To these Democrats the future is bleak and they want to go back to when things were better.

This is “mixed multitude” talk.  It takes us nowhere we would ever want to go. Just as those who wanted to go back the Egypt forgot the slavery and the taskmasters’ whips, those who fondly remember the good old days forget that those days were also the time of Jim Crow, misogyny, bigotry and inequality. I don’t know if anyone remembers the theme song of the television sitcom of the 1970’s “All in the Family”:

Songs that made the Hit Parade

Those were the days

And you knew who you were then

Boys were boys and men were men

Mister we could use a man like Herbert Hoover again

Everybody pulled his weight

Those were the days

For those who find history a challenge, “Guys like us” did indeed have it made, but anyone who was not like us, well that was a different story. “Boy were boys and men were men” which left women out in the cold both at home and in the workplace. “Herbert Hoover” was the president who is considered responsible for the great depression. If you couldn’t “pull your weight” because of age or health, you lived in abject poverty no matter what you did in life and the “LaSalle” was discontinued in 1940. When people began to buy other cars.  Yes, “Those were the days” alright, but I don’t think we would want to live there anymore.

Leaders need to have a vision of the future. They need to lead us to a “promised land” a land of “milk and honey”. The future belongs not to those looking backwards, but to those looking forward. I once heard a speaker say something that has stayed with me for many years, “There is a reason why cars have such a big windshield and such a small rear view mirror.” Life too requires a big windshield to see where we are going and a small rear view mirror so that we can see what is in our past and what is coming from behind, but we can’t spend too much time gazing into it or else we will run off the road and crash.

An army can lose if it only knows how to fight the last war, and does not prepare for the future. The late Alvin Toffler once wrote about “future shock” when we suddenly encounter a future we were not prepared for. He advocated preparing for the future and not living in the past. I find his predictions spot on, that the people clambering for a return to the past just can’t face the unknowns of the future.

But we can anticipate the future. As one secular year turns to the next, there are no end to those who make predictions about what the future may bring. There will be artificial intelligence, self-driving cars, automated factories, smaller bands of terrorists who still can cause a lot of damage, leaders who will promise us security if we give up our freedom, people on social media feeding us fake news and people on social media telling us that real news is actually fake. We are facing a world where the line between lies and truth becomes more blurred each day and we are facing a world where people will fight hard to be given the human rights that others take for granted.

This is not to make us feel depressed, nor to make us look back to the “good old days”. It is a reminder that these are problems that will need solutions. We can’t run away from them. We can’t close our eyes to them. They are problems if we refuse to face the issues they raise and do our best to resolve them. We will never be perfect and get it right the first time. But that does not give us the right to give up and go back.  The promised land is out there.  Myron Cohn, the comedian used to say, “My father in Eastern Europe was told that in America the streets were paved with gold. When he got here he discovered three things; the streets were not paved with gold, the streets were not paved and he was expected to do the paving”

The promised land of the future is out there. Milk and honey do not grow on trees. We are expected to go out and do the work to reap the rewards. The past is filled with dust and ashes. Only in the future can we seek out great promises. That will be our future if we work toward it and keep our eyes on where we are going.

Anyone who tells you something different is lying.